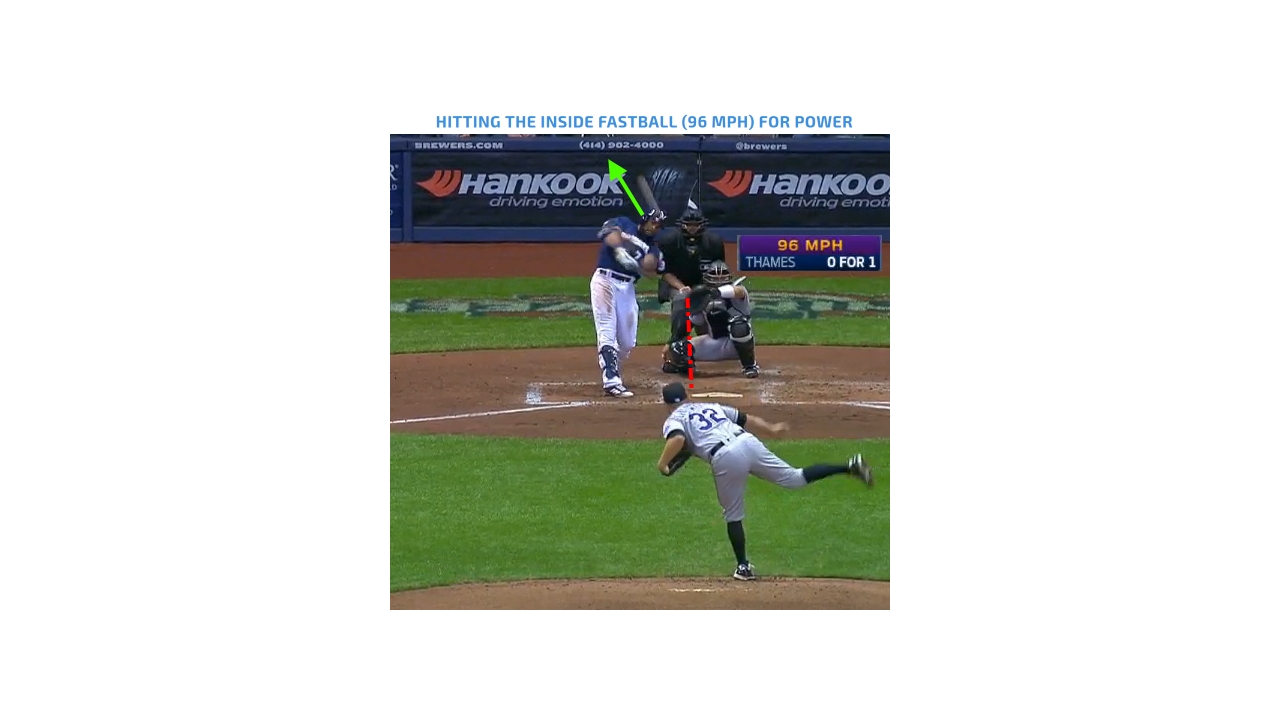 Late in 2016, playing in South Korea; Eric Thames is the first-of-many high profile professionals, purchasing our hitting trainer; for peak game-day performance. Soon after, signing a sixteen million dollar contract with the Milwaukee Brewers, breaking the home run record for the first month of the season, bamboozling the baseball world, hitting +95 mph; on the inside corner, for LASER homers! After which the higher powers/big league coaches take-over, resulting in the up-and-down performance; since.

The snippets of communication, between, Clinton Balgera, inventor of Exoprecise, and Eric Thames, preparing for a return to the big leagues. The information is not an endorsement of product/s, by Eric Thames.

YOU’RE SWINGING TOO MUCH WITH THE UPPER BODY

… Mate, if you’ve aspirations of getting back to the MLB, our product will get you there, I’ve developed a few simple drills to fix your problems. You’re one of the most gifted athletes in the league. If you do this right, you’ll dominate. I’m already feeling sorry for the pitchers.

… I can see you’re B/T: L/R – same as me. Bottom-hand dominant players naturally use a top-hand release follow through, hitting the low ball, however, struggling with the up-and-inside fastball; contact closer to the body, the weaker top hand, taking over.

… The back foot gives valuable insight for the swing, noticing the correlation with imbalance, in the batter’s box, under-rotation/over-rotation of the back foot, indicating, over-swinging/arming your swing; it’s critical, learning to hit, using the automatic/core muscles.

… Starting, half-turned on the back foot, likewise, I use to do the same; to improve bat speed, facing the cheese. However, it makes little difference, especially, hitting the best pitchers, spotting the inside corner, rotating the back-side from your hips/core is critical.

… Additionally, growing confidence after hitting a few +95 mph pitchers, you’ll realize, opening-up in the batting stance; is a waste of time. Merely, the band-aid solution, compensating for insecurity, hitting the dominant inside fastball. Train to improve your core hitting mechanics, achieving consistent rotation, turning your back foot from your hips, helping you to stay back, maintaining balance in the batter’s box.

… It’s like the matrix, “free your mind.” Forget about, swinging with the arms; start, turning from your hips.

“Dude…. you are spot on! As you saw, my hip rotation has been lagging for years! Even in the big leagues. I’m not satisfied to be at 60% I’m ready to put this thing on, and get to work.”

… There’s no such thing as one, swing type; for all pitches. Preparing to hit the hardest pitch types, up-and-in & down-and-away; everything in between will come naturally in the game. Top-hand mechanics for contact closer to your body, bottom-hand for an extension, both, in-front and outside; hit any pitch in any location.

(a) Minimizing the batting stride/swing path, finishing with both hands on the bat; contact closer to your body.
(b) Extending the stride/swing circumference, using a top-hand release finish as you feel pressure on your rear shoulder; extreme, low, outside and in-front locations.

Proper core mechanics, activating the reflex system; is the only way to hit a dominant +95 mph fastball, especially the up-and-inside location. Reduce the in-turn of your back foot, allowing you to be more comfortable in the spread out batting stance, engaging your core, blasting mechanics, improving bat speed/path, critical, hitting the above-average MLB inside fastball.

… Personally, the ratio is Laser Beam/top-hand isolation 10%, Laser Reflex/Laser Pro 60%, Laser Whip 20% and 10% for regular BP at the end of the session; comparison round. The sequence prepares you for the challenging pitches; up-and-inside, and down-and-away. Everything in between, is a piece of cake, fixing the dependency on your upper body, training the mind and body. Hitting the up-and-inside pitch on game day, relaxing, and blasting the core!

NOW HERE’S HOW IT’S GOING TO GO DOWN…

Isolating the blast phase of your swing, reducing the size of the Hit Lasers Bat Speed Trainer, increasing the forces. Top-Hand side toss is your money drill, being a B/T: L/R player; bottom hand dominant swing, coaching top hand/reflex mechanics, hitting the “up-and-inside” fastball, 500 ft straight down the line; with no “hook-spin.” Personally, I use a 34 inch Mizuno heavy bat, you’re strong, do the same. The extra weight exposes players “arming” the swing.

Next, get into the cage, or coaches B.P and facing live pitching; if you’re brave. One of your coaches watching the back-foot, side-on view, checking for proper rotation. In this case, we recommend you use a heavier bat, even shorten two to three inches on the bat. Laser Pro drills keep you connected, reducing the temptation of over-swinging/arming the swing; don’t fight it.

See it, to believe it…

After you crush 5-10 up-and-inside pitches, hitting the ball with backspin, keeping the ball fair; things start to click, progressing quickly.

Finish up with Laser Whip front toss, vary the speed, preparing for soft change-ups, and hard, breaking sliders on the outside edge of home plate. Use a lighter bat to get the whip on the extended pitch, as your back elbow gets away from your body your arms take the weight, therefore, using a heavy bat with low and extended contact zone is not recommended.

You know how to hit to the hanging stuff, coaches are experts, in this regard; time to build the real, “hitting-machine.”

Real world example: lefty hitter, facing a 95+ mph; funky, lefty-pitcher, tailing up-and-in, reducing the time to react, therefore your only option? Hit the ball closer to the body. Close the mind, open your eyes, track the ball deeper, using your reflexes. Short-to-short and flatter swing path, two-handed follow through. Additionally, I recommend using a heavy game-day bat, allowing your core to take the weight, compensating for the lack of extension/momentum power; seen with mid-level contact areas. You have the option to shorten up like Barry Bonds. Like I said after you realize you can hit the hard and inside pitch; your confidence grows, allowing you to hit the best pitchers in the MLB.

Real world example: facing the game 5 starter; 88 mph right-handed pitcher, scared to throw the fastball, in this case, “down and away.” Practice the Laser Whip swing, using a top-hand release, giving extra reach; preparing for a pitch on the outside edge of the home plate. Mentally, buying into the opposite field approach (critical). 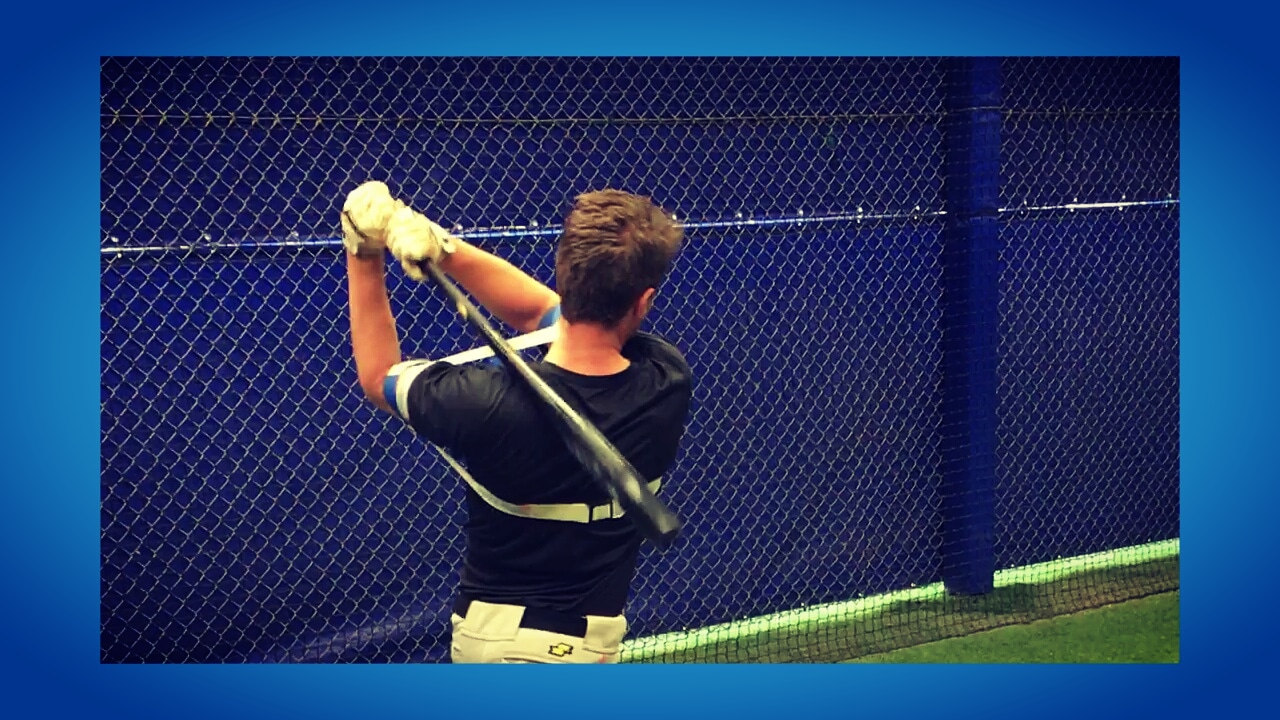 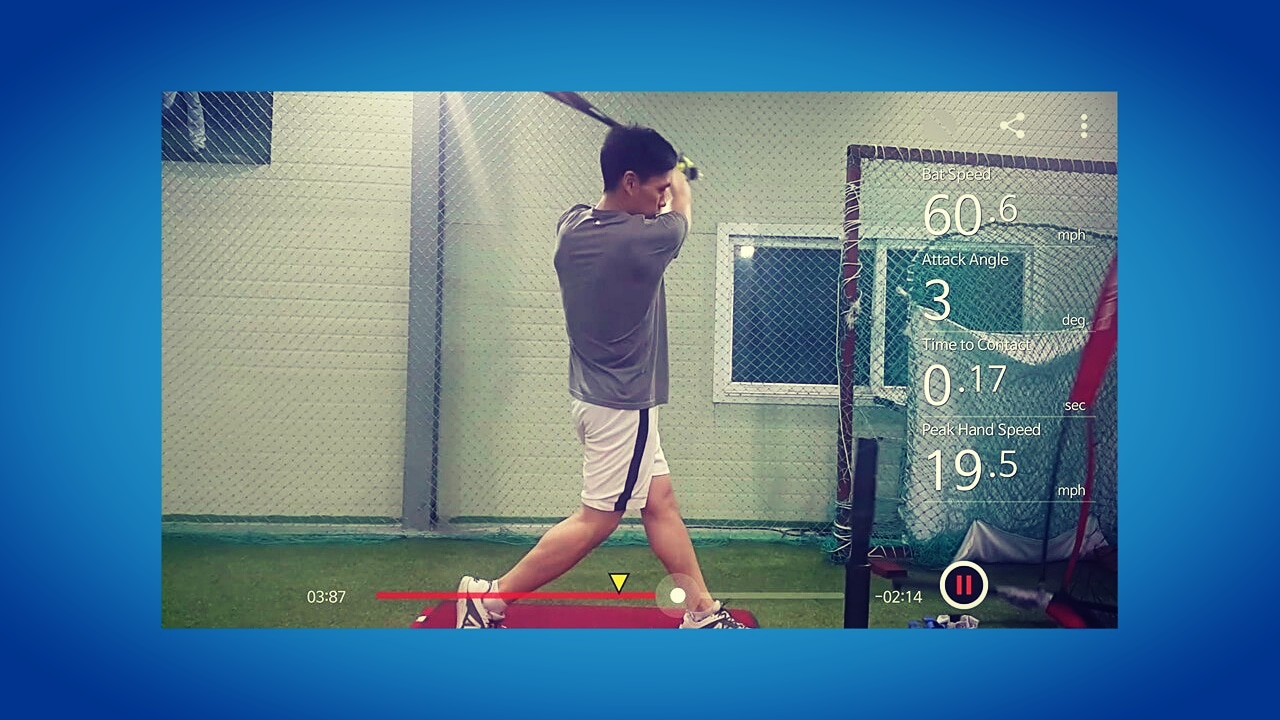 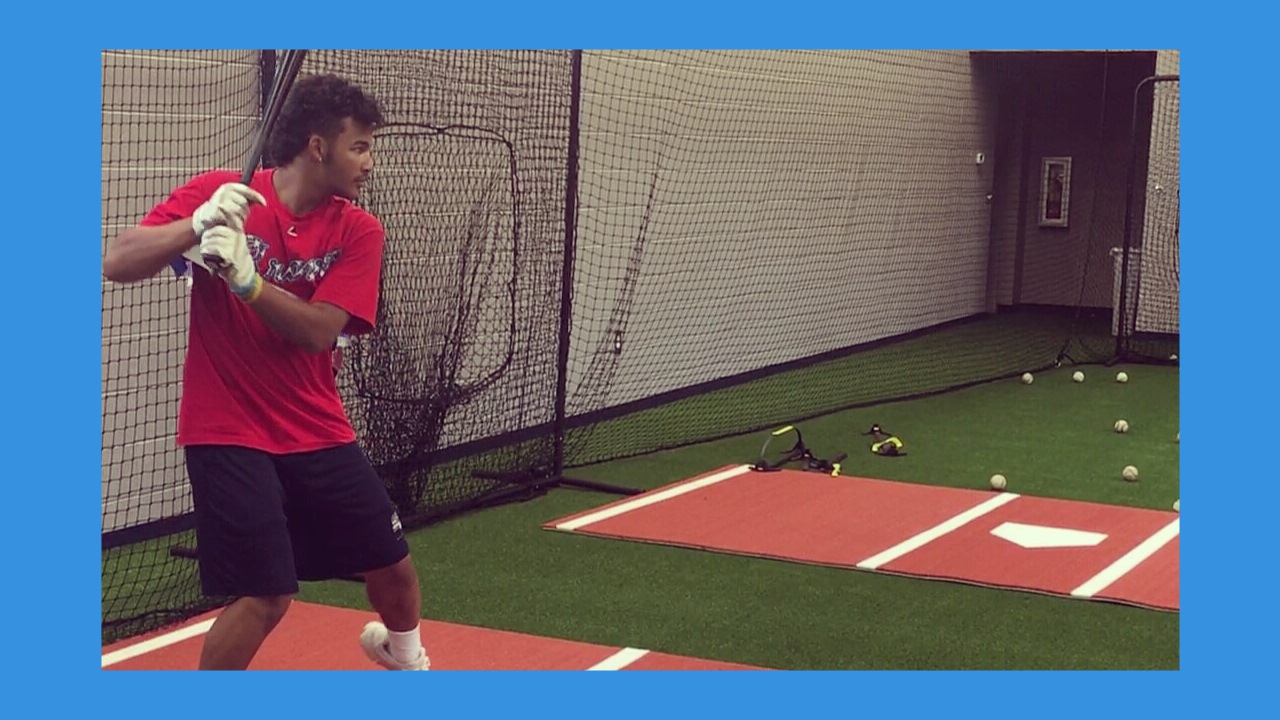 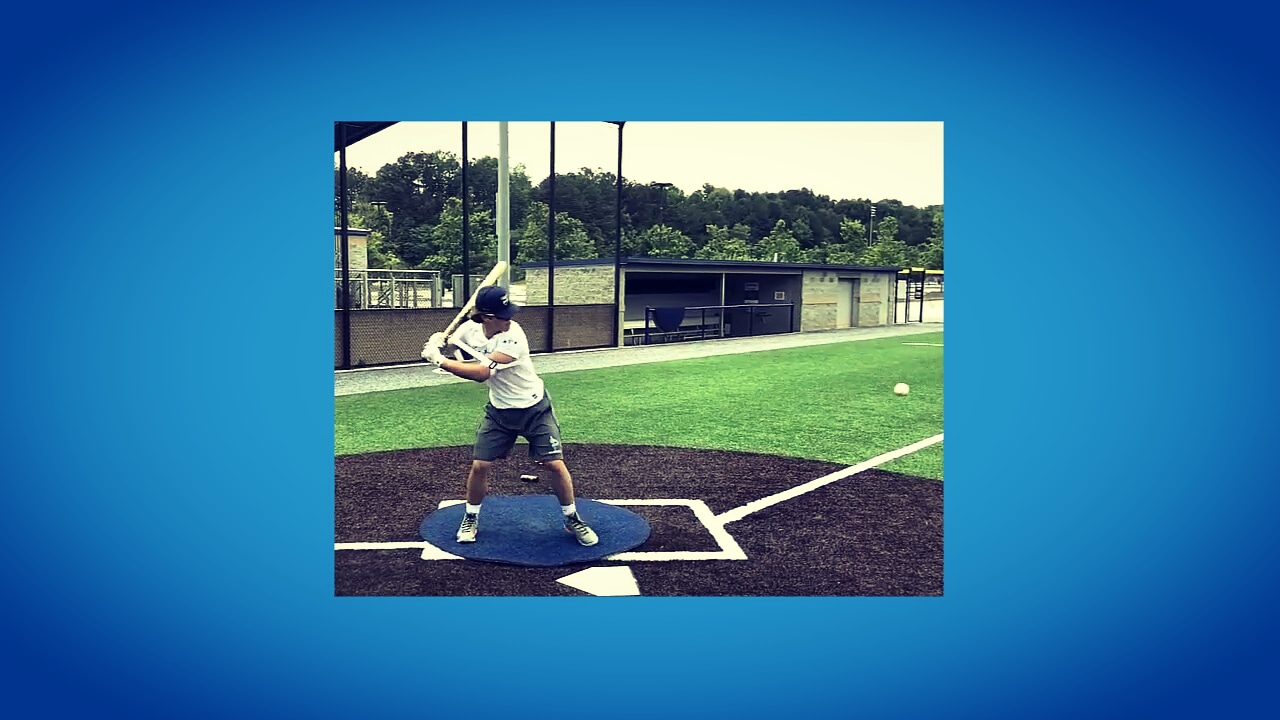 The first, of many players, hitting lasers, leaping from high school to college baseball, signing with Emory University, Georgia; USA. 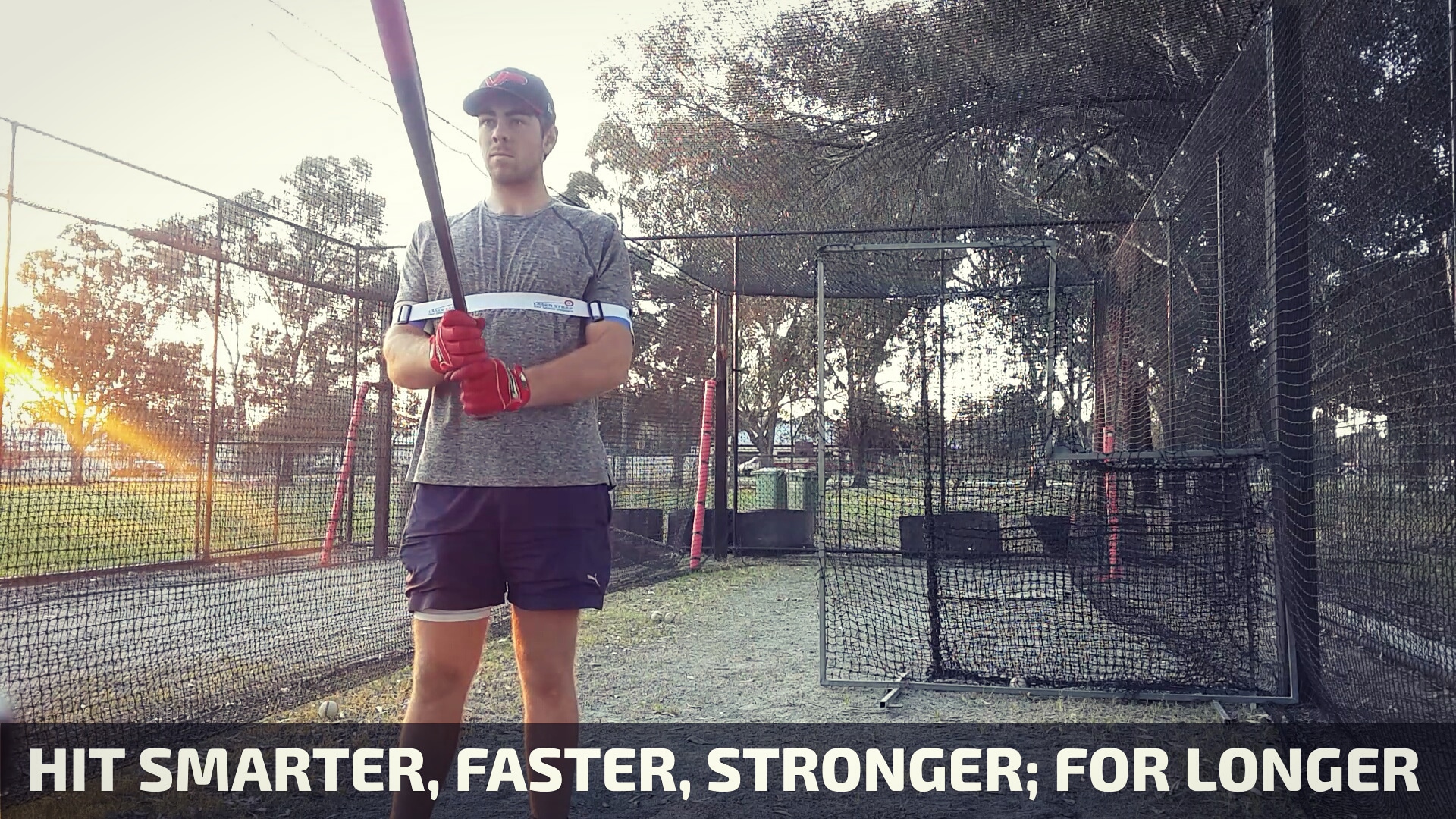 Jack Smalpage improving BA by 121 points, winning the league batting title; 19 yrs old at the time, the youngest player to achieve the award. 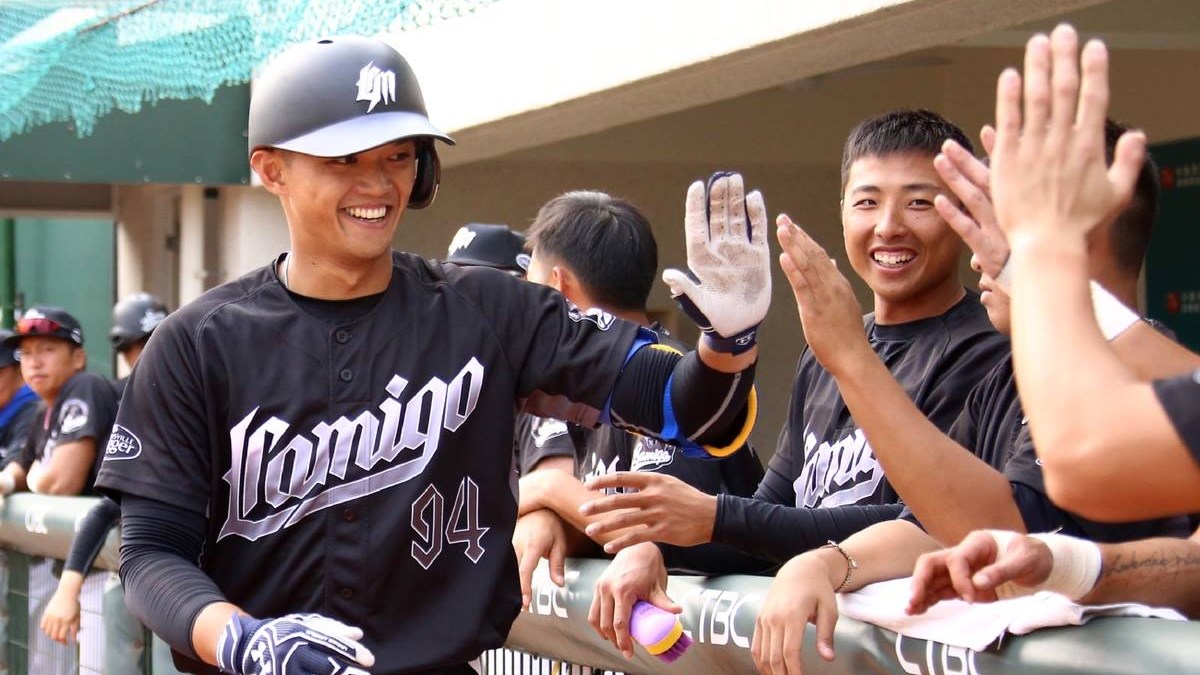 Aiming to make the Lamigo Monkey’s. Lin Chih-Yu’s dream is a reality, with a 0.321 avg; hitting a home run, during the first at bat!